Ivory Coast and Ghana May Seek to Boost Cocoa Prices 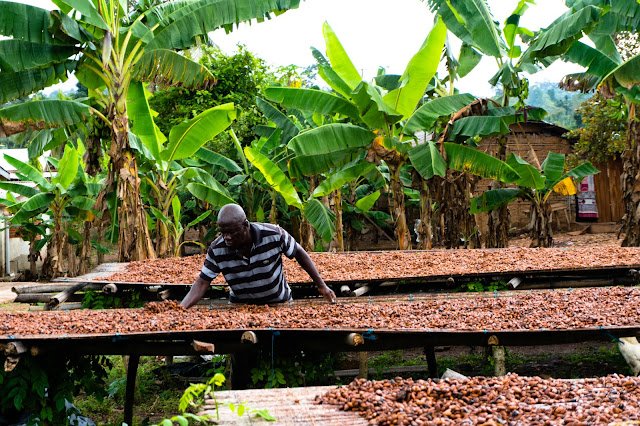 The world’s two biggest cocoa growers, Ivory Coast and Ghana, are planning to suspend exporters’ sustainability programs in a bid to exert more control over prices.

Regulators in Ivory Coast and Ghana, which produce more than 60% of the world’s cocoa, decided in a meeting in Accra last week to suspend programs allowing buyers to verify if cocoa is grown sustainably, according to two people familiar with the matter. They asked not to be named because they are not authorized to speak publicly.
This would make it more difficult for traders to access markets that seek guarantees that the key chocolate ingredient hasn’t been grown in protected forests or using child labor.
The West African nations used a similar move last year as leverage to get more companies to pay the Living-Income Differential, a higher-price paid to ensure cocoa farmers earn more money for their labor. They backed off days later after more buyers committed to paying an extra $400 a ton for their beans. This time, they want buyers to pay the full country premium, a separate differential charged for quality.
In Ivory Coast, foreign exporters had temporarily halted the purchase of cocoa contracts last month to force the regulator, Le Conseil du Cafe-Cacao, to reduce the country premium amid slowing demand for chocolate. In Ghana, there’s also been resistance to paying the country premium, one of the people said, with buyers switching to shorter-term contracts.
Spokespeople for the two West African regulators did not answer calls seeking comment.
The announcement to suspend the programs was delayed following the Nov. 12 death of Ghana’s former President Jerry Rawlings, the people said. The No. 2 producer’s official period of mourning ends Thursday.
London cocoa futures have dropped about 15% from a peak in September on expectations that big West African crops will lead to a global surplus.
Source: Bloomberg.com
Email: Editor@agricinafrica.com   | Agriculture in Africa Media
Cocoa Ghana Ivory Coast Living Income